Merry Christmas everyone, I’m not dead but I have been very busy with work for the last 6 months or so not giving me much time for painting, hopefully things will change a bit in the new year, but I did manage to find time to very quickly paint this old Citadel Space Santa just in time for Christmas – 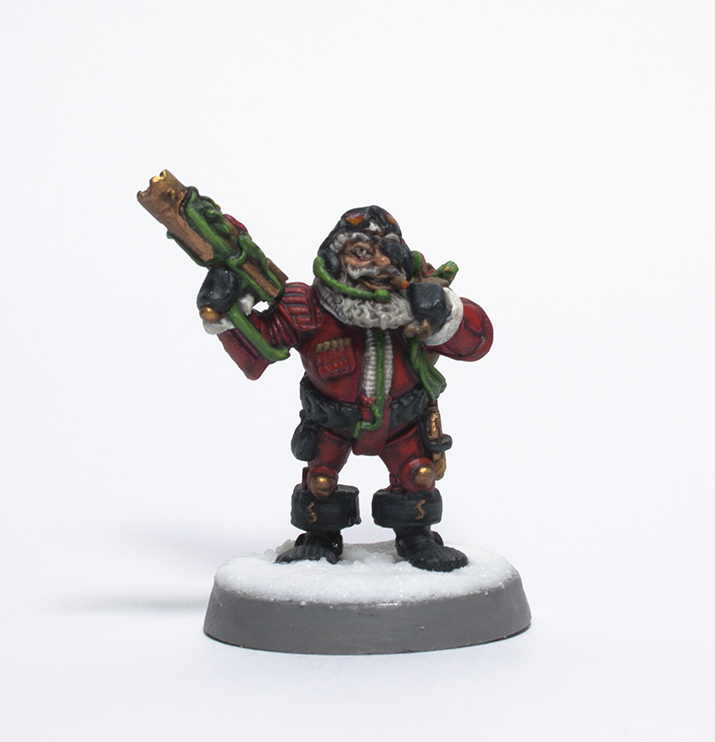 Hopefully I’ll be able to get a fair bit of painting done over the Christmas holidays and into 2017.

The fur trim while looking similar to the hair is different, with an Off White base coat followed by a Pale Grey Wash, then highlighted with Off White and then Dead White

Santa’s clothes were done with a base coat of Heavy Red, given a Black Wash to shade and then Red Gore was used followed with a Red Gore and Bloody Red mix and then a final highlight of Bloody Red.

The metallic parts such as the weapon and knee caps are Brassy Brass, a Black Wash, then Bright Bronze, Glorious Gold, and on the extreme edges Polished Gold. The green parts of the model were painted with Sick Green, shaded with Black Wash and then highlighted with Sick Green and then Escorpena Green. The small lights on the weapon were painted like gems with a base coat of Dead White and then coloured using Yellow Ink, Red Ink or Blue Ink a final highlight was used of Dead White, these were then Gloss Varnished to make them stand out more.

Finally the base was painted Cold Grey and then I mixed Army Painters Battlefields Snow with PVA glue in roughly equal quantities and spread it around the base with an old brush.